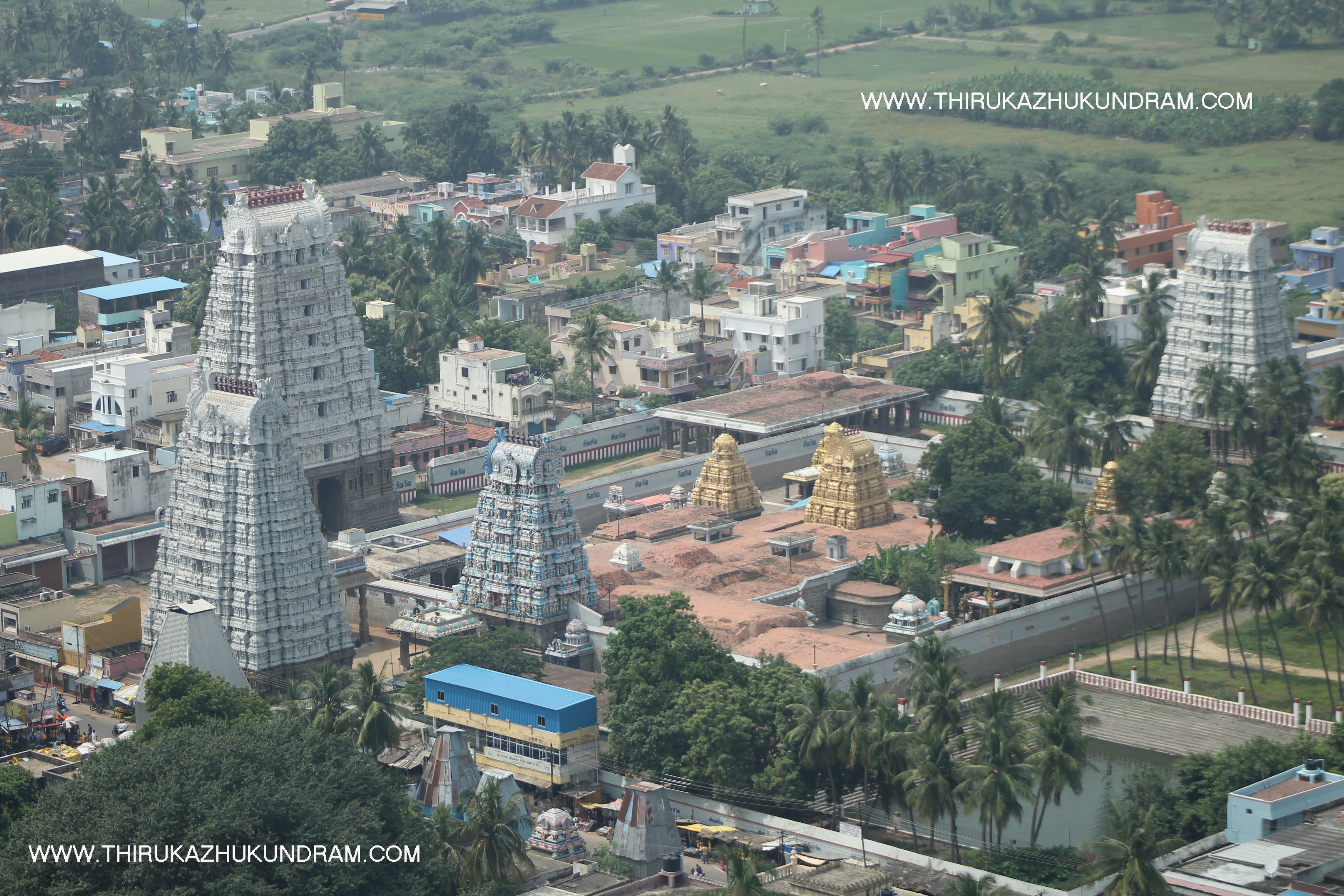 Let’s first take a closer look at thaazhakoil, which is at the foothill, housing deities “Lord Bhaktavachaleswarar” and “Lord Thirupurasundari”.

There is also a special shrine for Goddess Thirupursundari Amman, the architecture of which resembles Ambal shrine in Thanjavur Periya Kovil, from which it could be inferred that the shrine of Thirupurasundari Amman was sculpted in the 14 th century during the period of King Sundarapandian of Pandian dynasty. Abhishekams for Lordess Thirupurasundari Amman has a noteworthy aspect. The shrine is made of ashtagandhakam and various other herbs and hence the full-shrine abhishekam is carried only during three days in a year, namely, Aadi Uthiram, Panguni Uthiram, and Purattasi Navami (during dussehra) in Tamil calendar. On the other days, paadha (foot) abhishekam is carried out. Around the sanctum engraved on marble slabs fixed on the walls, are verses from the "Abhirami Andhathi”. 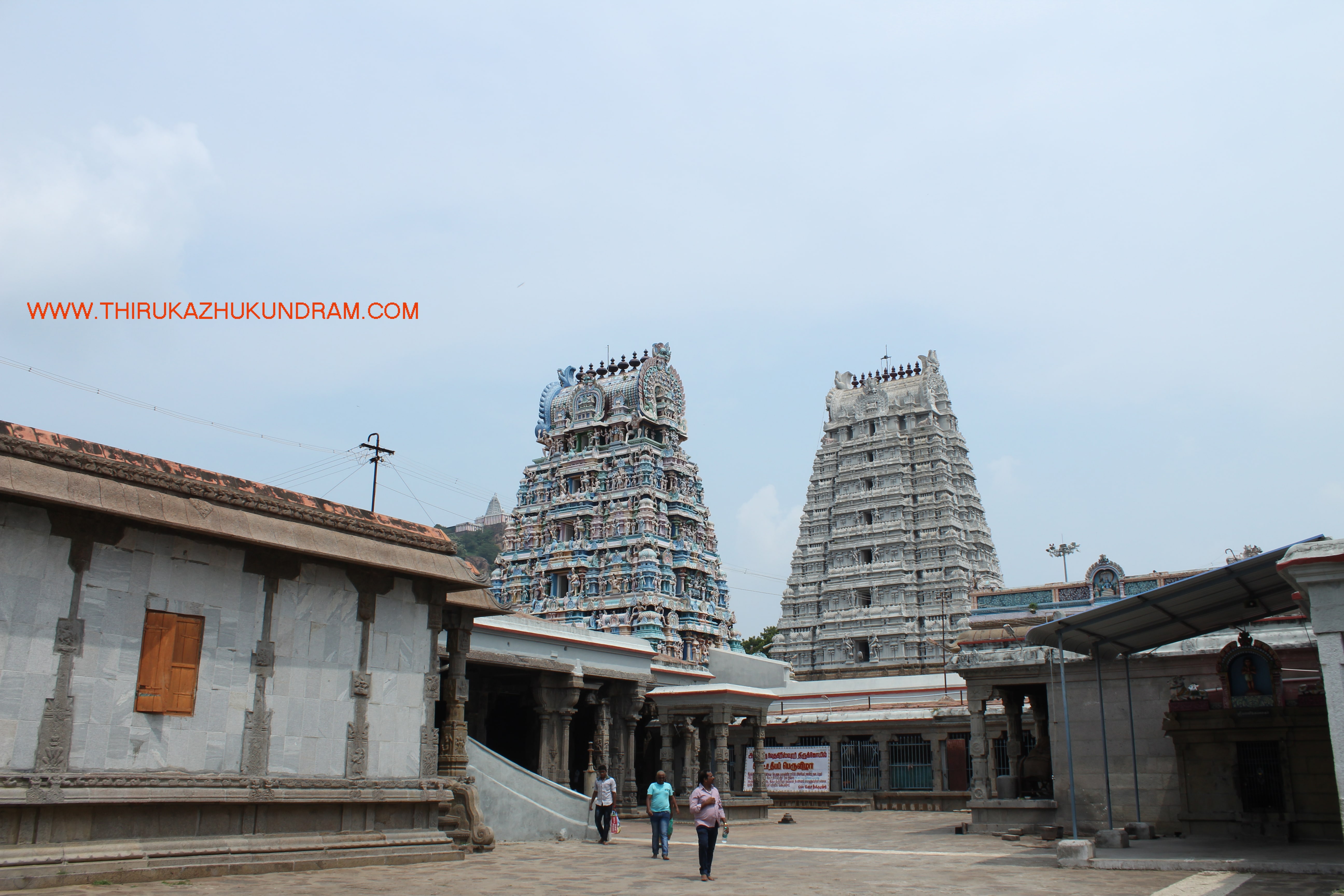 Other praise-worthy features are the exquisite sculpture and architecture of the temple. The magnificently sized compound wall and curved Mandapams also lend personality to the peerless beauty of the temple.

The temple has four gopurams (towers), the tallest with nine tiers (on the southern side) and the other three with seven tiers. Of the four gopurams, eastern one with nine kalasams is the ancient amongst all. However, during the 10-day brahmotsavam festival during the tamil month of Chithirai, the Lord exits the temple to offer His blessings to the masses via southern gopuram. On entering through the eastern gopuram, a 4-pillar mandapam with Lord Ganesha and Lord Muruga as the “Dwarabalagargal” (gatekeepers) welcomes you and one could also find a 16-pillar mandapam on the left. 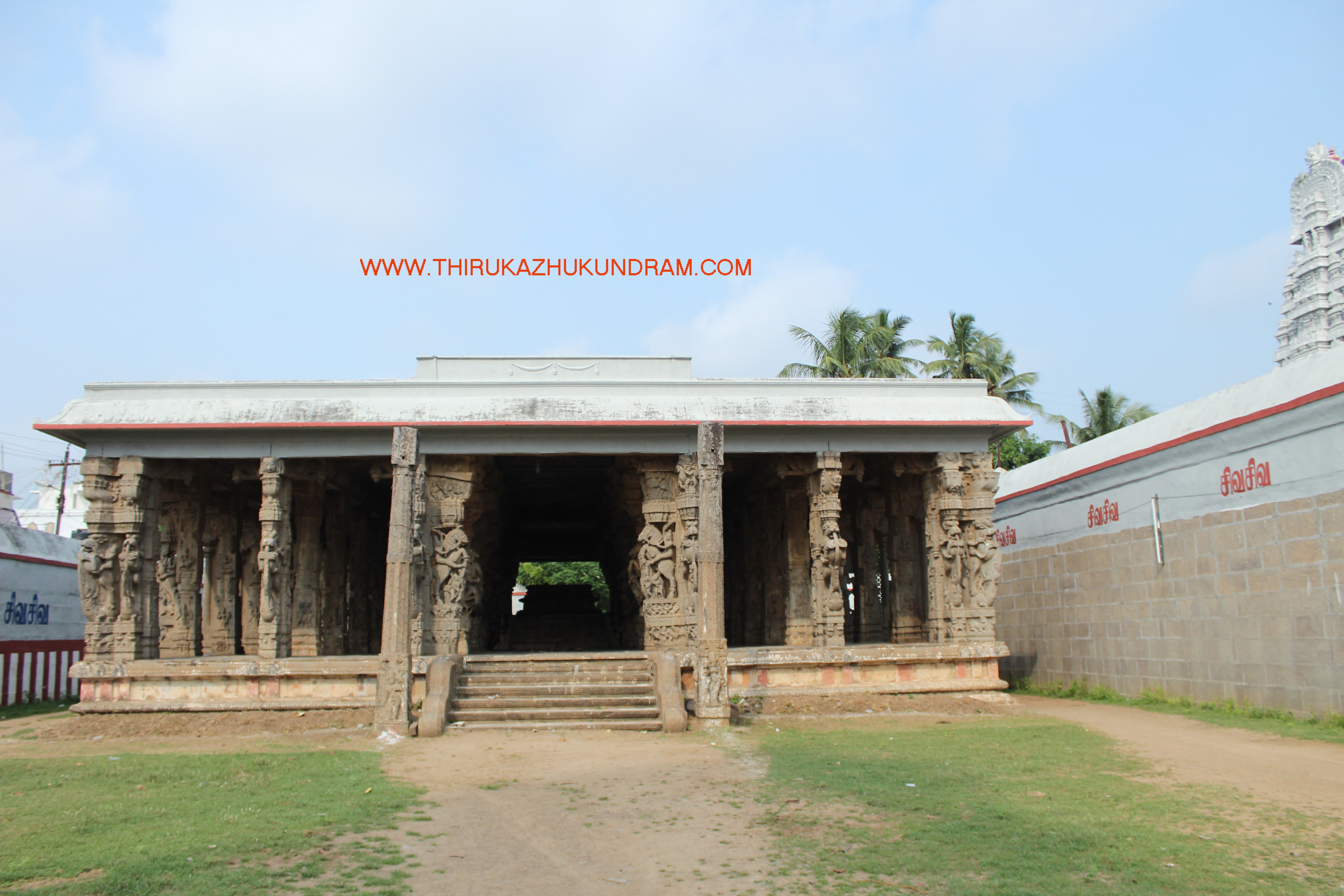 In the western gopuram, there are engravings which preach the philosophy that animal, human, devas, and every other being could perform Shiva Pooja emphasizing the equal rights to all devotees. One will also find “Aamai (Totoise) Mandapam” which was built in the 18 th century and whose architecture resembles 100-pillar mandapam at Varadarajar Perumal temple in Kancheepuram. This mandapam gets its name from the fact that “Bali Peedam) is in the shape of tortoise shell upon which Pooja is carried out. Futher, it is in this mandapam, Kalayana Utsavam (Wedding Ceremony for Lord and Lordess), Natarajar Abhishekam and other key festivals are carried out. This mandapam also has scriptures and other carvings portraying Lord Shiva’s actions (leelai).

In the prakaram of the temple, the tank, Nandi Thirtham, is located. It has a huge Nandi (mount of Siva), facing Vedagiriswarar on the hilltop. The absence of a Nandi before the presiding deity on the hilltop is a unique feature. 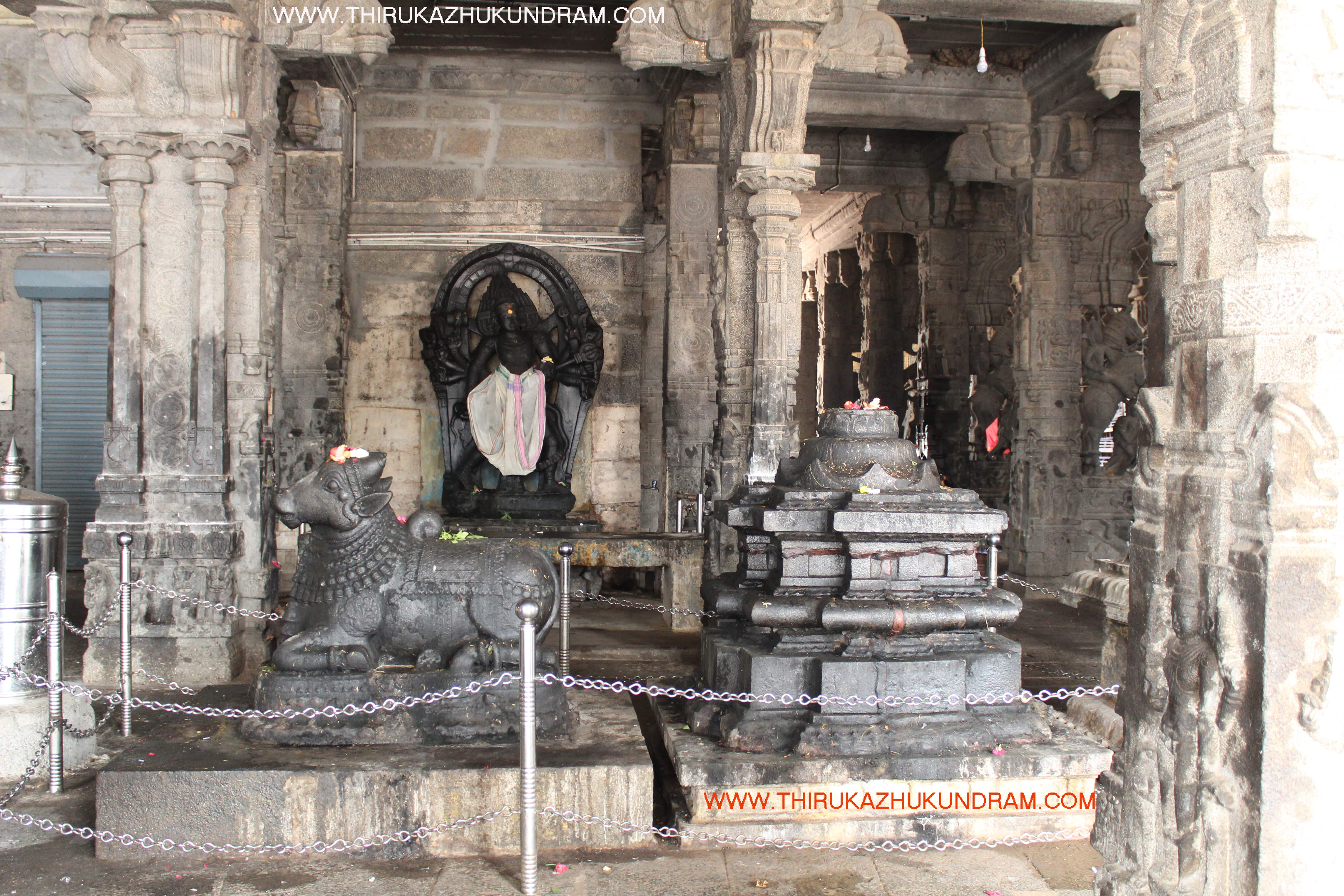 The mahamandapam that fringes the inner gopuram (Rishi Gopuram) contains a fine sculptural representation of a 7-feet tall Agora Veerabhadrar (Siva in ferocious form), a colossal figure seven feet high. One could also see the statues of 63 Nayanmars, saints who sang hymns in praise of Lord Shiva. A similar image can be seen at the Meenakshi temple in Madurai.

The prakaram around the sanctum of Lord Bakthavatsaleswarar (the presiding deity of the temple) has many images. The shape of the vimanam of the temple is peculiar, resembling the Buddhist viharas in the North, since the spherical top portion is cut in front. It was here that Lord Siva appeared before the Tamil saint Manickavasagar, in the form of Dakshinamurthi, and initiated him into the secrets of the holy Panchaksharam. The plantain tree is the sthala vriksham of the temple. Behind the linga, one could see the statues of Lord Somaskandar (Lord Shiva, Lordess Parvathy and Lord Muruga as a child) engraved on the wall. 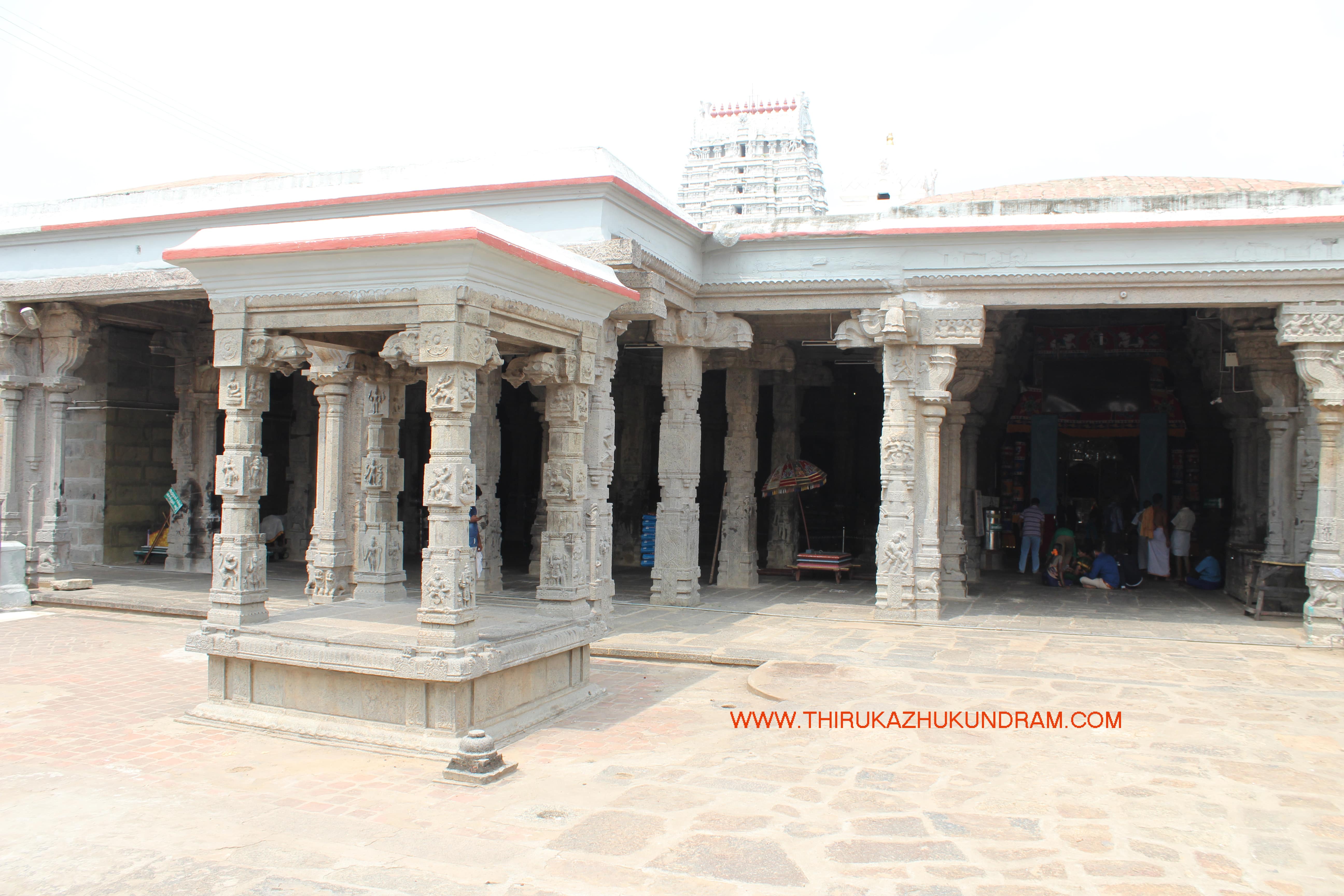 The saivite saints namely appar, sambandhar, sundarar and manikavasagar sang hymns in praise of Lord Vedagireeswara standing near the foothill of the mountain without climbing it. This location where the four saint stood was subsequently built into a temple and henceforth called “Naalvar koil (The temple of four saints)”.

*Timings are bound to vary during the festivals. 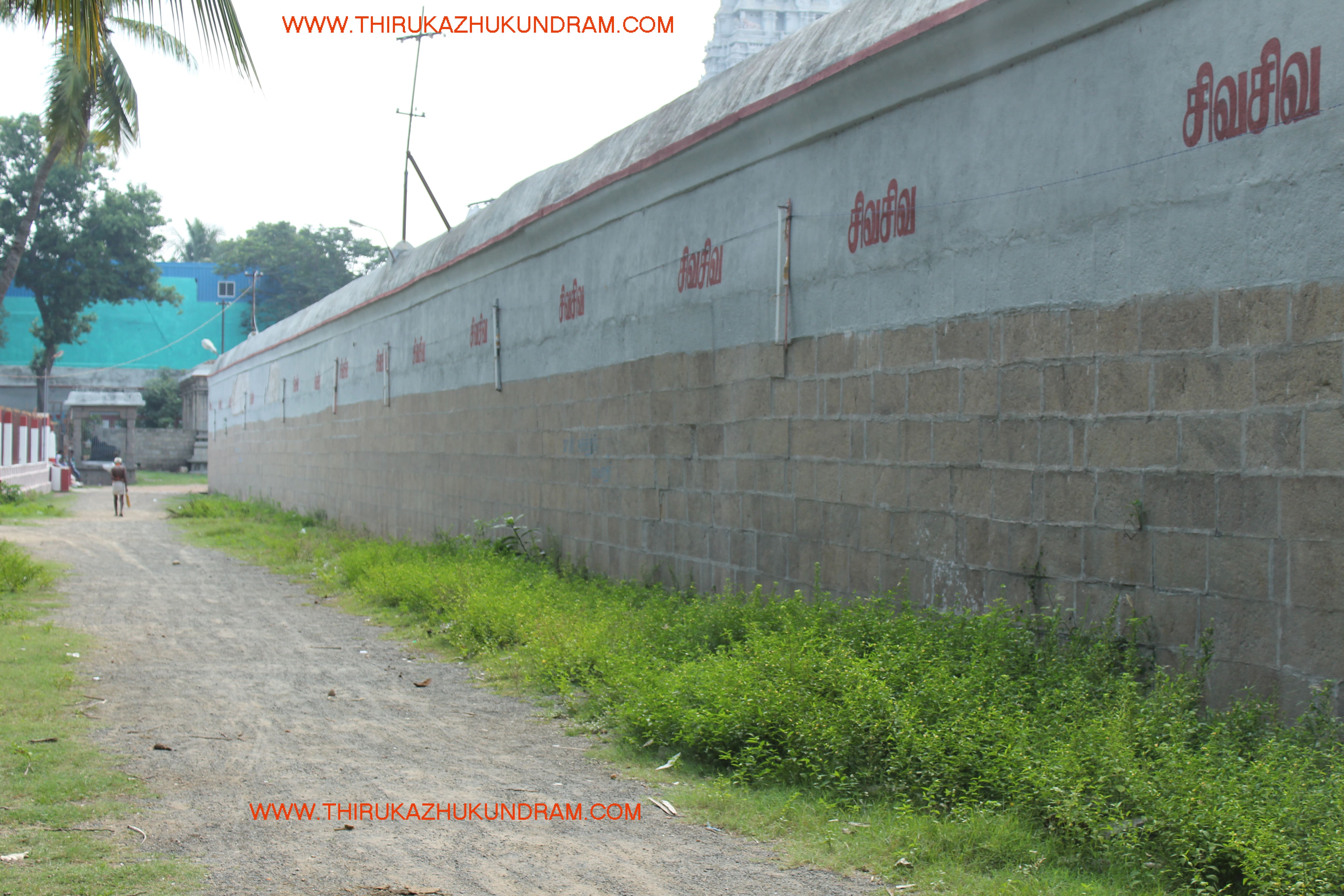